Sometimes I don’t care. I mean I just don’t give a damn. It’s not always and the feeling goes away pretty quick, but it happens nonetheless. I mean, devoting all your time and energy to positive thinking is great and all, but sometimes, it just doesn’t work. Sometimes you just have to say screw it. Forgive me if that’s blunt and crude, but it’s true. That negativity seeps in and takes hold; it’s like a poison. And in real life, every once in a while it wins.

The trick is to make sure negativity’s win is only once in a while.
Right now, I’m struggling to get my book ready for publication. It’s a long, slow, involved, long, slow, difficult, long, slow, and stressful process. Anyone else who’s been through it can attest to that. And it feels like it’s going to take a thousand lifetimes to get finished. Keep in mind, the story is actually finished. Right now I’m just working on getting it ready for readers to actually enjoy. I mean, I’d love for you to read The Odyssey of Ryou Un Maru right now! But you can’t, because it isn’t ready… yet. Anyway, the point is, it’s hard and I’m struggling with the thought that even after all this, I’m still motivated to get it out there albeit much later than I originally planned.

Also, there are times when I ‘just want to write’, but that’s only a fantasy I indulge in periodically. Part of being a writer is marketing what you’ve written. It’s not the most glamorous thing but it is necessary. It’s a weird dichotomy but a necessary one for anyone that wants to make it as a published author. I know that, but it still sucks. In a perfect (read: fantasy) world, I’d just write the books and a legion of editors, proofreaders, and publishers would do all the grunt work of getting it to press. But that is just not the case, especially since my name isn’t StephenKing, JK Rawling, Dick Francis, Dan Brown, Jackie Collins, or any other best-selling author you could name off the top of your head. It’s when I compare myself to these successful folks, look at what they’ve accomplished and then look at my small body of work I get disheartened and just want to quit. A little guy voice in my head starts whispering negativity and cynicism and I start to believe him.  That ‘just screw it’ attitude sinks in and I want to quit. Man I Hate that guy!

I listen to him every once in a while and agree. It’s then I wish I had someone to smack me in the face (proverbially… or maybe actually). I hate failure; I hate not even trying waaaaay more. So I cry a little bit, sniffle, feel sad for a while and then do a ball check and suck it up. Because I just can’t quit.

I have found a few things to keep me going. The latest book I’ve taken the time to read is Self-Printed (3rd Ed.): The Sane Person's Guide to Self-Publishing by Catherine Ryan Howard. It’s pretty much a how to combined with a personal experience book about how she managed to get through the whole publishing mess that is self-printing. There are lots of useful tid bits and it’s nice to read about others that struggle with the same issues.

Even though it’s taking a billion billion times longer than I want or could have believed, I’m still on my mission to be a successful writer. Hell, I might not ever make it, but I just won’t give up. Is that pathetic or perseverance? I don’t know, I guess maybe success is the only way to answer that for sure…

Thanks for reading. Questions and Comments are welcome! 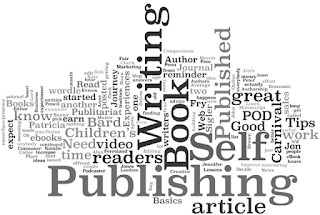