Is There Life on Mars?

Humans have always been fascinated with the Red Planet. If you’ve been paying attention lately, we’ve sent quite a few spacecraft to the planet. Recent discoveries have revealed startling and amazing results, like the possibility seasonal of liquid water as this article relates. It’s a veritable wonder that on such a seemingly desolate and inhospitable place, the single most important factor to life still exists.

When I was a kid (and even today), space, space flight and the cosmos in general captivated me like no other subject. That’s probably why even now I’m a self-admitted Sci-Fi nerd. I’ll admit it, and I’m not ashamed either. I would soak up every TV show and movie I could get my eyes on; the books too were a source of inspiration and endless imagination. I used to wonder why Sci-Fi and fantasy were such powerful draws to my young mind. At first I just thought that stuff was wicked cool. Then I started to believe it was just because I was kind of dorky and socially awkward. After time went by, I grew up and experienced a lot of things, good and bad, I began to realize something. This realization started to really take shape when I truly committed to writing. Like all forms of imagination, Sci-Fi and Fantasy open up the mind to the infinite vastness of wonder. Those imaginary worlds are full of the astounding ‘what if’ factors in life that allow for amazing and awesome things to occur. Immersing yourself in the imagination frees you from corporeal bonds, social ties, accepted facts, unfortunate mental inhibitions, and fear. When the anchor of social construction is cut, the mind is free to sail upon the ocean of possibility. And when that happens, the universe changes, even if only in your own mind.

So if there's water on Mars, is it such a fantastic leap to think there might be life too? What if there is? How mind altering that would be. Think of it. To go to a place where commone sense tells you there can be no life, and you find it anyway, It makes you think about your own situation. If you are stuck in a mindset that is desolate and barren, perhaps all you have to do is look for something you don't expect. You may find it! In reality, inspiration is always just a thought away. It might even be lurking in the most unexpected places. I suggest getting out there and exploring the cosmos of your mind. There's a universe of wonder in there. Go find it. 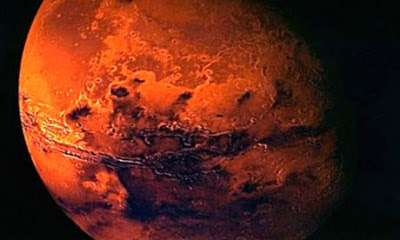 Thanks for ready. Comments and questions are welcome.